“Much of my work is about the small, seemingly mundane things and the importance of these moments,  especially those spent in the company of others. The lockdown period taught us many things, one of which  was how we crave human contact and connection. With that in mind, I’ve created three pieces that celebrate  these moments – physical and digital manifestations of the beauty of these fleeting moments.”

GAZELL.iO is pleased to present the inaugural solo show by its represented artist Brendan Dawes. The  exhibition, Moments Spent with Others, explores the beauty behind moments that may initially seem insignificant  and how the concept of time and space is connected to the captivating feeling of interacting with others.

His second time exhibiting with the gallery, Moments Spent with Others, is an invitation to Dawes’ personal  stories wrapped in digital visualisations. Over the recent pandemic period, as human interaction became  scarce and precious, we grew accustomed to detaching ourselves from other people. Dawes embraces these  moments by recreating them into datasets, algorithms, and data visualisations by incorporating memories  that are personal to the artist but are also universally enjoyed.

One such memory – sitting on the edge of a building in Soho, New York, in 2001, whilst eating pizza with his  friend and designer Hillman Curtis, who changed his life when Dawes moved to New York City to work for  him, sets the tone for his first work. The work’s aesthetics captures the bustling colours of heavy New York  traffic and other sensations Dawes experienced whilst watching life go by in this memory. 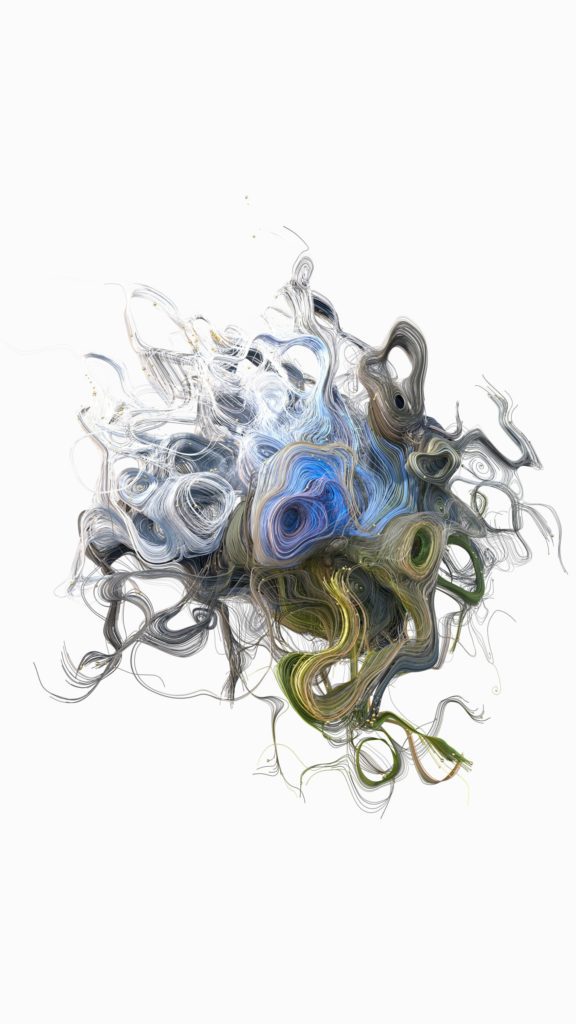 A second work takes inspiration from Dawes’ late-night experiences of watching classic films with his father,  which ignited Dawes’ passion for film – with colour profiles incorporated from films such as Chinatown (1974),  All the President’s Men (1976) and Vertigo (1958) among others. The film is an essential reference point in much  of Dawes’ work and has significantly influenced many of the artist’s previous projects.

Finally, the third work in the show reflects Dawes’ love for simply sitting on a park bench with his partner  Lisa. Specific elements of this pastime that resonate with the artist include people-watching and taking in the  sights and sounds of the surrounding area. The inspirations that shaped this work came from images taken by  the couple from their favourite park bench.

Dawes draws much of his inspiration from popular culture and nature, often revolving his work around the  concept of time and memory – and how these can intertwine. These analytical explorations have been an  ongoing theme over Dawes’ career, as his work questions our understanding of such concepts.

Brendan Dawes is a UK based artist using generative processes involving data, machine learning and  algorithms to create interactive installations, electronic objects, online experiences, data visualisations,  motion graphics and imagery for screen and print. A Lumen Prize winner and Aesthetica Art Prize alumni,  his work is featured in the permanent collection of New York’s Museum of Modern Art, has been 3D printed  on the International Space Station, and has been recognised by awards bodies including Fast Company  Innovation Design, Information is Beautiful and D&AD.

Founded in 2010 by Mila Askarova, the Gazelli Art House in London brings a fresh perspective to Mayfair –  through championing artists from all corners of the globe. Focusing on artists at the height of their practice,  the gallery showcases their work through a diverse programme of exhibitions and events. Along with its  sister site in Baku, Gazelli Art House specialises in promoting art from Azerbaijan and its neighbours to  introduce a greater understanding of the rich linguistic, religious and historical ties that connect these areas  to international audiences. In 2015, the gallery further expanded to support artists working in digital art  through its online platform, GAZELL.iO.